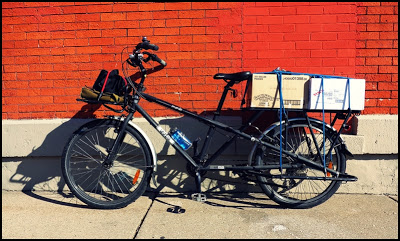 On the bike…a nylon bag containing a camera and its charger, a canvas bag containing a book and a few papers, and two cardboard boxes containing 5lbs of honey, 10lbs of whole wheat flour, and an entire leg of lamb.
The view…is on Allen Street here in Buffalo, NY. What a lovely day; nearly spring-like.
A quick comment…so both of these photos were taken on my way home from work this afternoon. On my way to work this morning the bike was not loaded. Allen Street is narrow and slow going so I often ride in the middle of the street. Anyhow, I was at a traffic signal waiting for it to change so I could make a left turn. I was in the middle of the street with my arm out signalling that I would be turning.  Then I hear a “beep, beep” from the vehicle behind me. I turn and see that it is a large SUV.  Here we go, I thought to myself. So I put my arm out again. He beeped again. I ignored it (or at least acted like I did). The light did not change yet but I hear his engine going; he was pulling up next to me. He pulls up and rolls down his window and I fully expected him to tell me to get out of the middle of the street. Instead, he says, “Hey buddy, a couple of your bungee cords fell off your bike about a half block back.” I turned and looked, and sure enough, there they were (and they were my new ones, too). All I could do was thank him before the light changed and we both parted. The moral of this story is (fill in the blank). 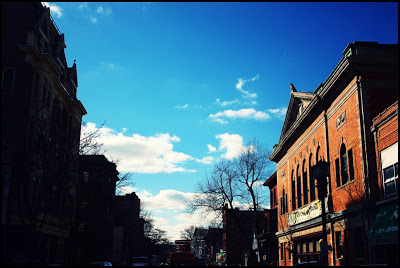