“If the only prayer you ever say is thank you, that would be sufficient.”
~ Meister Johann Eckhardt

In the general scheme of things I have so many things to be thankful for…but sometimes (oftentimes) with the business of life and distractions it is difficult to remember this. This week, for example, has been trying. Like much of the country we have been gripped with an intense heatwave. I do not have air conditioning in my house nor do I at work…the kitchen has been incredibly hot. At times I found myself speaking in single syllables to conserve energy (no joke). But still–when I consciously think about it–I am thankful for the job that I have…that I am good at what I do and still find it interesting and engaging. Another example (of how everything is really awesome but sometimes I don’t really see it) is represented in these photos. I’ve been having issues with my camera lens this past week and it’s likely I need to purchase another when I am already strapped for cash (if anyone has had this problem with their lens I would love to hear your comments), so I brought the camera to work with me as I often do with the intention of taking some test-shots on my lunch break. The garden where I work is incredible, it really is, and that alone is something to be thankful for. And as I took these photos sometimes the lens operated correctly and sometimes it didn’t. I was frustrated and really hot–sweat dripping from me in the noonday sun–as I stalked the garden in my chef’s uniform. But because of the malfunctioning lens it forced me to concentrate on what I saw through it. And what I saw was nothing short of pure unadulterated beauty. And for that I am truly thankful. As for the lens…it does seem to be on it’s way out (these were the better photos, many were blurry). I’ll get a new one eventually, somehow. But as I walked back to the sweltering kitchen I had the sense–as I do now typing these words–that everything will be fine, that I have much to be thankful for. And that feeling alone is enough to give thanks. 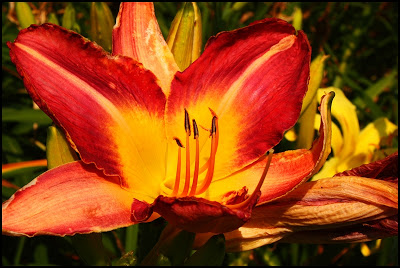